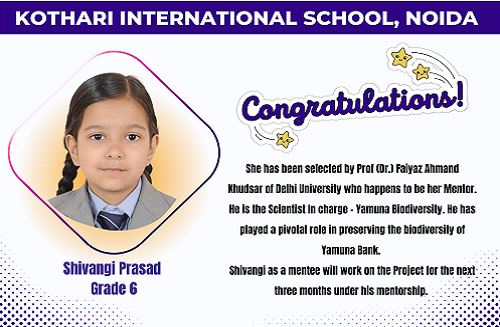 Shivangi Prasad of Grade 6, Kothari International School Noida participated in the Science Fiction writing sponsored by Eco Roots Foundation. Her entry titled, “Talking Tress of Botanical Garden” with the application of Artificial Intelligence (AI) which made it possible for the trees to talk is selected FIRST in the top 18 entries from schools over India.

She was selected for the next round which consisted of an interview with a panel of renowned scientists from India. She chose interactive media to impart knowledge about the trees. She is now in the TOP 6 FINALISTS.

She has been selected by Prof (Dr.) Faiyaz Ahmad Khudsar of Delhi University who happens to be her Mentor. He is the Scientist In-charge – of Yamuna Biodiversity. He has played a pivotal role in preserving the biodiversity of Yamuna Bank.
Shivangi as a mentee will work on the Project for the next three months under his mentorship.